A POEM FOR MY 52ND BIRTHDAY 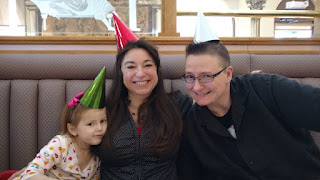 A POEM FOR MY 52ND BIRTHDAY
The only year I will ever be twice the age
of both my children, the living and the dead

What in your life is calling you,
when all the noise is silenced,
the meetings adjourned,
the lists laid aside,
and the wild iris blooms
by itself in the dark forest.
What still pulls on your soul?
-- Rumi


Today I am 52 --
I have spun around the sun
as many times
as there are weeks in each year
and twice as many as my son,
who loved spinning until
he fell down, ever will.

The Mayans marked eras in calendar
rounds of 52 years, each year’s end
opening a portal to the underworld.
I’ve eagerly straddled that divide,
but in math, 52’s an untouchable
number, never the sum of its divisors,
so today I was forced to choose

To start my next era, to embrace
having survived as many years
as there are playing cards in a deck,
laps in the British Grand Prix,
white keys on the piano, upper
and lowercase letters in our alphabet, and
pickups in a game that brings you to your knees.

52 is the atomic number of tellurium,
a rare, shimmering crystal elementally
more precious than platinum.
Discovering my worth at 52,
I’ve gotten rid of the jokers
so I can play with a full deck
the hand I’ve been dealt.

Here among the living, I will be double
my daughter’s age for just this one year,
old enough to know such coincidences
won’t come twice,
we’ll only get so many invitations to the table,
so many chances to turn a bad deal
into a hand we can play. At 52, I’m all in.
Posted by Lanette Sweeney at April 16, 2018