A mom friend in Australia asked me to explain to her children why people march. I couldn't find a book to explain it, so I wrote this. Feel free to share -- and offer feedback. 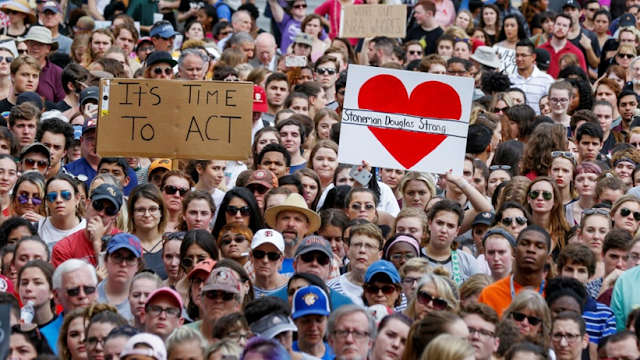 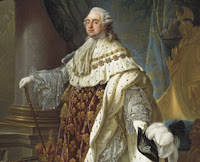 Once upon a time, much of the world was ruled by kings and queens. One especially greedy king, Louis XIV of France, and his greedy wife, Marie Antionette, demanded all the people give their money to the royal family to make their big, fancy palace and their bejeweled, fancy clothes even bigger, fancier and more bejeweled.

They told the people they didn't care if they starved.
The people of France grew angry at how unfair it was that they worked hard but then had to give their money to the king and queen. They thought Versailles, the palace, was fancy enough! They grew so angry, they marched into the streets and demanded change. This was the first known march.  Soldiers fought back, but in the end, the people won -- and made the soldiers chop off the heads of the king and queen!  (Things were very violent back then.)
Since then, all around the world, people have marched to get their leaders to pay attention to their demands for fairness and justice. If their leaders ignore peaceful marching, some people burn and break things to get the leaders' attention -- and the marches turn into riots.

A lot of marches start, just like in France, because people are angry their leaders are taking too much of their money. When leaders take the people's money, that is called a tax, and tax money is supposed to be spent to help everyone, such as by building roads or schools or libraries--but greedy leaders often keep much of the tax money for themselves and their rich friends. Like that French king and queen, they don't care if people starve. 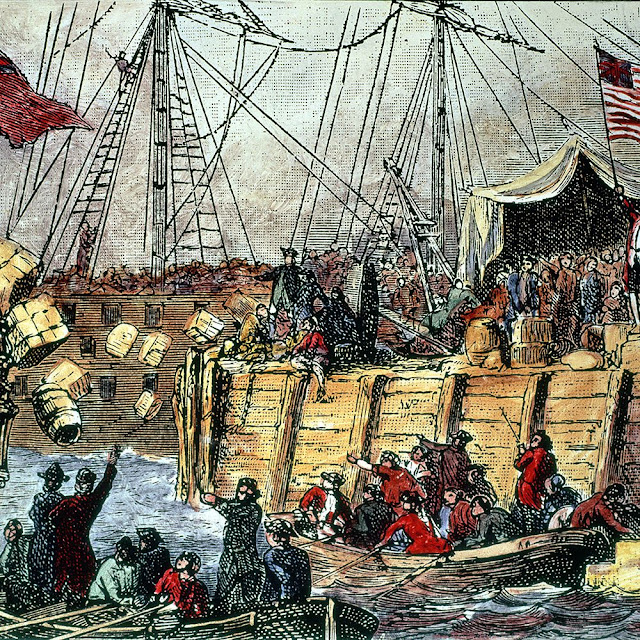 Early Americans rioted by throwing tea off a boat because their leader, the King of England, was keeping their tax money instead of spending it to help them. When the Americans won that fight, they made a new rule: NO MORE KINGS AND QUEENS bossing the people around. They wanted every person to choose their leaders and their laws by vote.

Unfortunately, those early Americans had a crazy idea about what “a person" was: they thought only people with white skin, a penis, and a lot of money should be able to vote. (No, really!) They made a new law that said only men with white skin who owned land could be the leaders and the voters.

How did we change this terrible situation? People marched! And protested! And sometimes rioted or broke the law to get the leaders to change their minds. 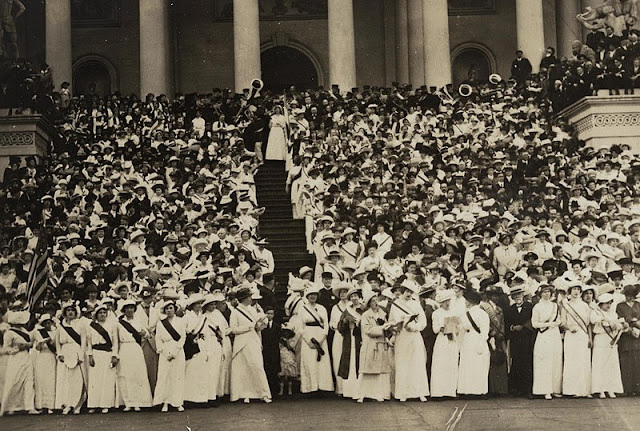 Here are women marching in Washington D.C. six years before we could vote.
Things were even harder for men and women with darker skin. White people stole land from the darker-skinned people here before them--and then they stole actual darker-skinned people from their homes in Africa and made them work in the U.S. as slaves. Whites put the Africans in chains and made them do all the whites’ farm work and house work for no money. 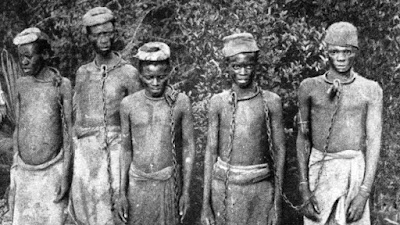 White people stole the babies of Black people and sold them. White people beat and even killed the brown and black-skinned people. This happened in Australia, too, to the Aboriginal people who lived in Australia for tens of thousands of years before the white people came. The Aboriginals weren't called slaves but they were beaten and forced to work for free, which is the same thing.

How did we change this terrible situation? People marched! And protested! And sometimes rioted or broke the law to get the leaders to change their minds. People with darker skin had to march, riot, scream, break laws, starve themselves, and run away for hundreds of years before they were allowed to be free. Some white people realized how wrong slavery was and helped the black people gain their freedom, but changing everyone's mind about slavery took a long time. Some people's minds still aren't changed! 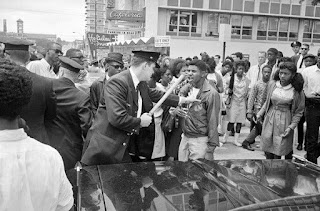 to let women of all colors and men with black or brown skin get any of their power away from them. One of the ways they do this is by fighting the marchers. The police have guns with rubber bullets and real bullets, bayonets, batons or clubs, tear gas, snap bombs, water hoses, vicious dogs 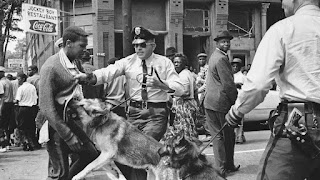 and pepper spray. Sometimes police use these weapons to violently scare even peaceful marchers into giving up and going home. 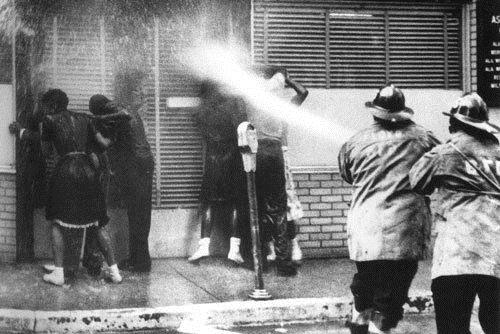 Marches for black people’s rights and women's rights are still happening today because things are still not fair.  A lot of white people say everyone has the same chances in life and gets equal treatment now from teachers, police, bankers, and employers. They insist this is true (even though the facts definitely show otherwise) because they like to think they have nicer homes or better jobs only because they worked hard and got what they deserved. But lots of black people work very hard and never get to buy a house or have a good job.
The worst thing happening to black people now is that police are killing them for no good reason. Sadly, this has always been the case but now people have cameras on their phones and are taking videos of the killings, showing the black people didn't do anything wrong before police killed them. The police have been lying to us, which was hard for white people to believe, as police are usually nice to us. 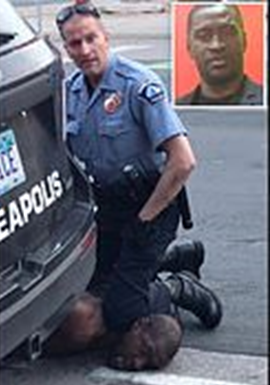 Most recently, a Black man named George Floyd was arrested for maybe
giving someone a fake $20 bill, and the officer arresting him choked him to death by throwing him on the ground and kneeling on his neck. George called for help. He said he couldn't breathe. People all around were begging the policeman to get off George's neck. George even cried out for his Mama. But the police officer stayed on George's neck until he was dead.
How can we get police to stop killing unarmed black people? We have to march! and protest! And sometimes we even have to riot or break the law to get the leaders to pay attention. Because people marched, the officer who killed George Floyd was arrested and is in jail.
Sadly, the U.S. is currently ruled by a crazy, mean man who loves the police to use violence. He has told cops to be rougher when they arrest people; he had police hurt people to clear away a march in front of the White House. He even wanted them to use a weapon 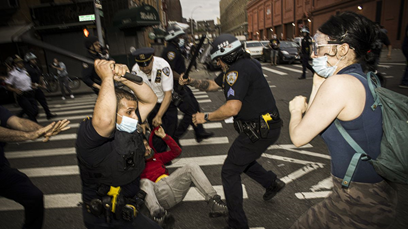 called a heat ray that would make protesters' skin feel like it was on fire. The police don't want to give up their power so they have been doing what he says and treating the people they are supposed to serve and protect as if they are the enemies. They are spraying tear gas and rubber bullets at the protesters, even peaceful ones, or beating them with clubs. Some protesters have even lost an eye or been killed. This little girl is crying because police shot pepper spray into her face; her parents are pouring milk on her eyes to help wash it away. 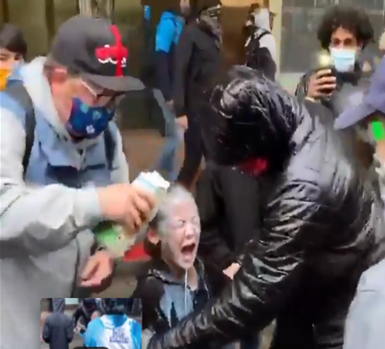 And here is a little girl on her daddy's shoulders being threatened by police with giant guns. 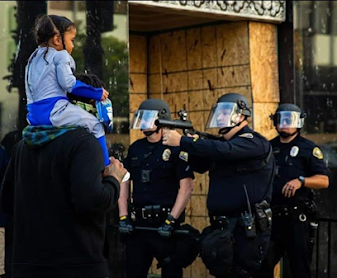 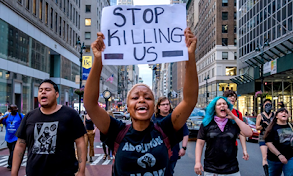 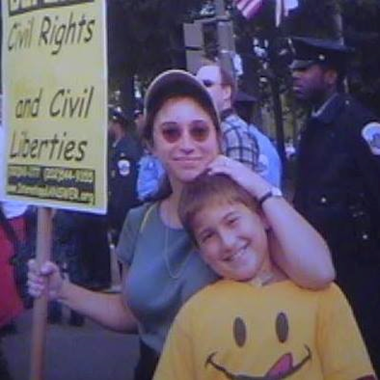 I have marched against wars, for women's rights, and for black people's lives. I have taken my children to march with me, and my now grown-up daughter is a passionate activist who marches all the time. I'm very proud of her. 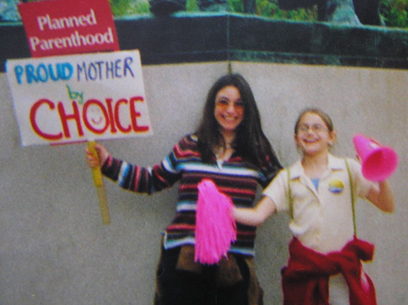 My wife and I stand every Saturday for black lives in our town. (Standing vigil is like marching except everyone stays still. We do this now to avoid giving one another the Corona virus.) 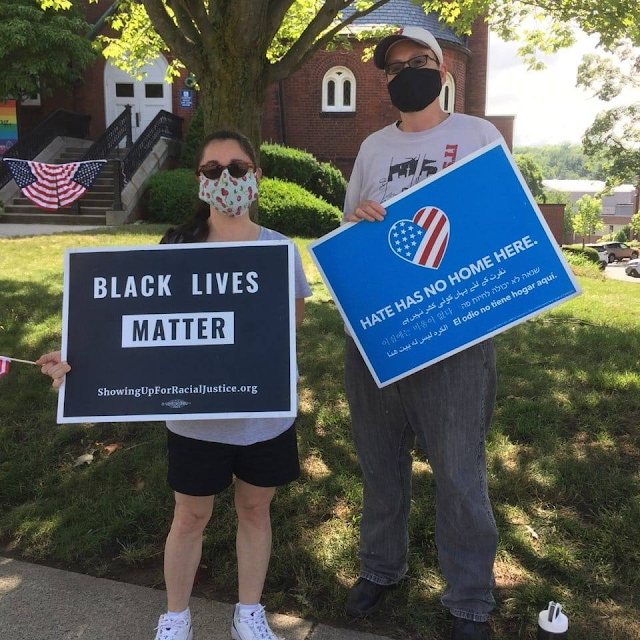 So the next time someone asks you why people march, you can tell them people march to make life better for everybody. I plan to keep marching until more changes are made and black and white people can all feel safe together.

Posted by Lanette Sweeney at September 29, 2020