My huge grief over having my son die of addiction overshadowed most other thoughts for the first couple of years after his overdose death in 2016. But more recently, I've been reflecting on Kyle's life and what he achieved--and what he didn't live long enough or become brave enough to ever achieve

I often think of how proud Kyle would be of his little sister, who was two years younger than him but is now two years older than he ever lived to be. Jamie fights for justice in every single thing she does: in her work choices, her group memberships, her spending, her gift-giving (she gets me a gift to a bail-fund gift for mothers in prison for Mother's Day every year), her living choices, and her volunteer time. Kyle was always proud of her for all she was achieving. He was proud of both of us, actually, when  we marched for justice, even though I don't think he took part in any marches after the anti-war one I took him to when he was 11. But I remember in 2014 when I posted on Facebook that I was taking part in a march for Ferguson, he was so excited to tell people his mom had gone all the way to Ferguson to stand up for racial justice. (He was definitely disappointed when I explained I was just marching for Ferguson, in Springfield, MA, not in Ferguson.)

Anyway, the point of this post when I started it was to share that I get sad sometimes thinking that Kyle was too caught up in his addiction at the end of his life to participate in any way in politics or activism. I was proud of him at earlier periods of his life when he stood up for social justice; I know he took pride in the work he did for City Year. But sometimes it seemed to me that he'd done nothing but use drugs and try to recover for the last couple of years of his life.

Then the other day this post he put on Facebook in the last year of his life popped up in my memories. He was in the fourth month of a six-month inpatient rehab program that gradually increased his freedoms until he was supposed to be ready to go out to live on his own. So when he wrote this, he was  in the middle of his longest sober period since his daughter's birth two years earlier. This must have been his first job as he transitioned toward self-sufficiency from that rehab. I might not agree with how he practiced ally-ship here, but I’m proud that he did *something* instead of nothing. This is my "share" of his post, which starts with my recalling how he fought against homophobia as a child: 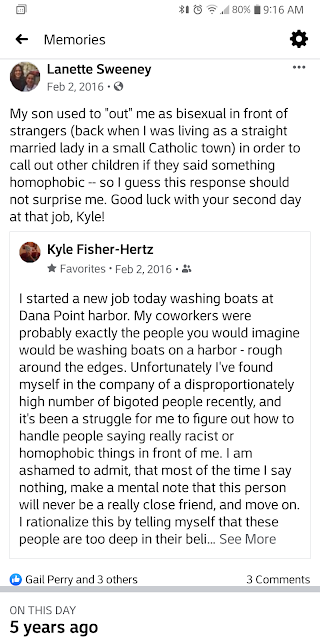 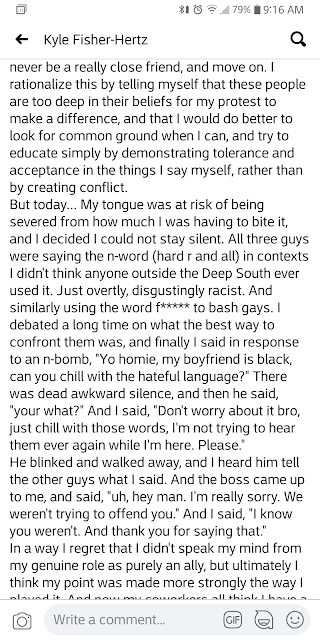 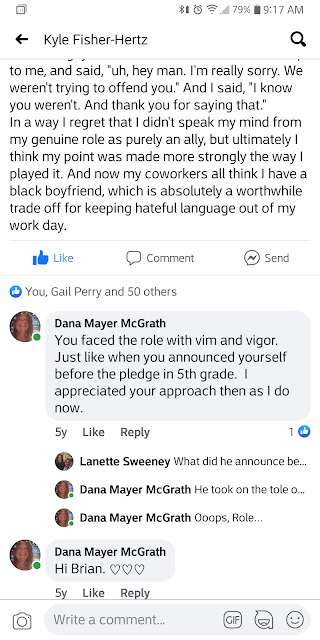 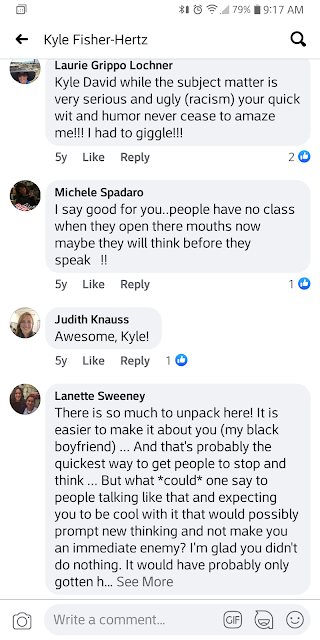 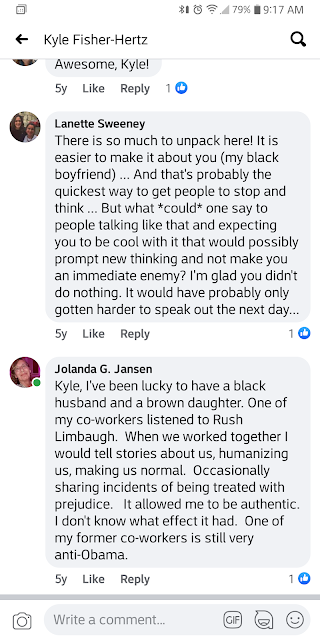 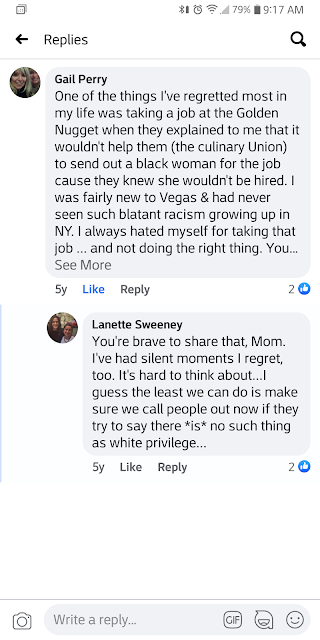 Reading through this and the comments that followed made me wish I had expressed more clearly how proud I was of him for standing up for what was right. He was a short guy (under 5'7" I think, though his driver's license claimed 5'8") and he was definitely not a fighter; probably it took a lot of courage for him to say what he did to those guys. And yet, my response was to tell him that I wanted him to think about how he could have done more or done it better.

Losing a child gives you a lifetime to review one's regrets. I've gotten much better at forgiving myself for the mistakes I made, knowing that every mother makes mistakes -- but that doesn't mean I don't still wish I had done better. So I share this blog in the hopes that if you still have alive children, you can learn from my mistakes. Tell your kids what a great job they're doing. Full Stop. (Jamie, I hope you see  this and know I'm talking to you, too.)

See everyone next week: I'm publishing a post every Tuesday and Friday now. PLEASE subscribe if you haven't already.