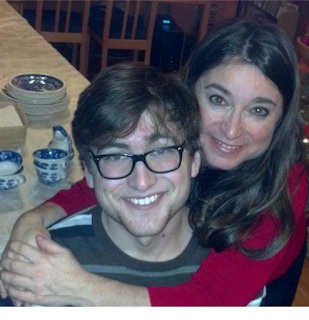 Monday, August 31st,  was International Overdose Awareness Day, and I marked the day with a short online event in honor of my son, Kyle David Fisher-Hertz, who died of an overdose when he was 26. This is an essay that captures much of what we covered in that event.

Last year the pandemic was not kind to addicts. A record number of Americans, more than 90,000 sons and daughters, died of a drug overdose in 2020, more than in any previous year--and 20,000 more than the previous year, when it seemed we were finally turning the tide and beginning to stem the steady increase in overdose deaths that had plagued us for the previous decade. This graph shows how fatal overdoses steadily climbed, with the previous peak passing 60,000 in 2017. The numbers rose to more than 80,000 dead the next year but dropped back down to 70,000 in 2019 before surging last year, with a huge spike in the first months after we were all sent into lockdown. 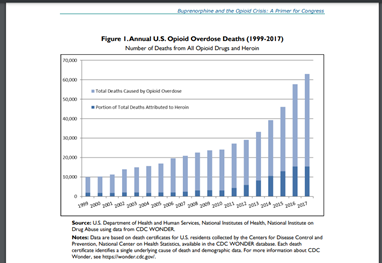 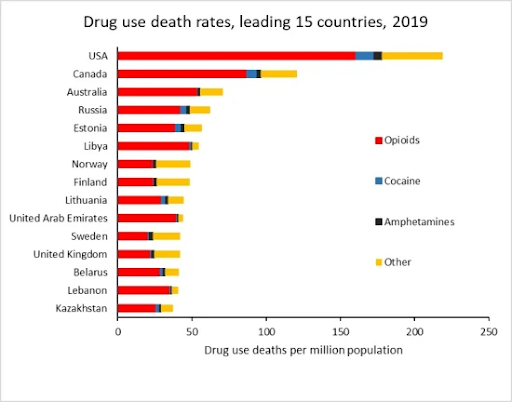 There is a serious sickness in our society, and our overdoses are merely a symptom of that sickness, which I believe is rooted in our mindless consumerism and the resulting lack of purpose in our lives. My daughter argues "lack of purpose" is a privileged excuse for drug addiction, but we are a privileged people in North America, and more money gives us greater access to drugs, so it makes sense that feeling a lack of meaning in our lives while having the resources to ameliorate our emptiness by getting high would lead to greater use. But I digress.

When I told my daughter I would be opening the event by saying a few words about the overdose epidemic, she wondered what new thing I could say when so much has already been said about this issue. But I believe that even though we are years into this epidemic, the two main messages I want to share in both my new book, What I Should Have Said: A Poetry Memoir about Losing a Child to Addiction, and in this essay, are still not familiar enough to most people.

The first message is that medication-assisted treatment saves lives. No one should be judged or stigmatized for taking Methadone or Suboxone or following any other medical plan to stay off street drugs. I wish I had known this myself when my son was alive. He and I wanted him to get Vivitrol, a monthly shot that blocks opioid receptors and cravings and doesn’t allow you to get high--but he had just turned 26, lost my insurance, and discovered that the state health insurance he had in Nevada didn’t cover that drug, which has the generic name Naltrexone. The clinic would only offer him Suboxone or Methadone. 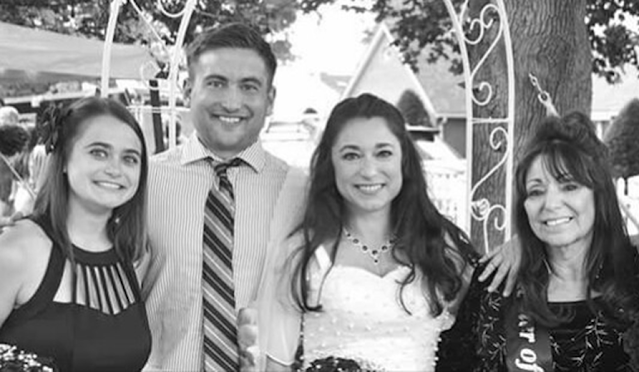 My son (shown here, sober at my wedding, 16 days before he died) called me the weekend before he died to say he thought if he couldn’t get the Vivitrol shot, maybe he would just take the Suboxone they were offering him. Tragically, I maintained a stony, judgmental silence, letting him know I would be disappointed in him if he went on maintenance drugs. I thought he was “better” than that. I thought he could just stop. I didn’t realize his disease was terminal until it killed him.

Since then, I have had the opportunity to visit a methadone clinic, where I saw dozens of healthy young people run in, take their daily dose, and run back out to take their kids to daycare, to get to their jobs, to go on with their lives. If you love an addict, please know he or she has a deadly disease with an incredibly high relapse rate, as high as 97 percent without medically assisted treatment. I still think Naltrexone shots are a miracle; they now have shots that can block opioid receptors for up to six months at a time, and I hope more state insurance covers that medicine than when my son was trying to get that shot. But if the miracle shots are not an option, going on Suboxone or Methadone will provide the addicts we love and want to stay alive a bridge to wellness. We should be celebrating the people who go that route, choosing to live and giving themselves an opportunity to function again. I wish I had understood this in time to have not failed my son when he asked my advice. Instead, I believe my silence discouraged him from pursuing that solution, so instead of going back to the clinic, he got street drugs and took them until they killed him three days later.

My second message is for the millions of parents, siblings, friends, cousins and other loved ones who lost someone to an overdose in the past five years. Though early grief will shake you to your core and make you question whether you can go on, I am here to tell you you can survive and learn to carry your grief with grace if you just hang in there and practice self care like it’s your motherfucking job. You can have a life of peace and even joy after even the most profound and devastating loss. Post-traumatic growth is real. No one wants to be driven to their knees by loss and trauma, but all of us can, in time, with a lot of hard work on ourselves, allow our worst experiences to open our hearts and bring us closer to our true spiritual selves.

And now I want to say a few words about what killed my amazing, brilliant son Kyle: He died not only because he was an addict but because he cared so much about what other people thought of him that he spent the last 10 years of his life always trying to one up himself and act crazier and more death defying than he had the day before. He started rehab “only” addicted to crack, but he probably thought he wasn’t as hardcore as the other addicts were until he was as addicted as everyone else to the most deadly drug of all, so he let the other guys in rehab teach him how to shoot heroin. I have an essay on my website about toxic masculinity--which is what Kyle was demonstrating when he kept risking his life to appear cool--and how it contributed to Kyle's death

But beyond that I want to say please, if you’re a young person who hasn’t done drugs yet, please don’t let yourself be swayed by your desire to impress anyone. If you’ve done some drugs, maybe dabbled in alcohol or marijuana, but haven’t yet done the deadly trifecta (crack, meth, and heroin), please don’t try to play it cool if someone offers you one of those. Please know you are loveable without laying your life on the line to look like what someone else wants you to be. No high is worth what you will be doing to your life if you take any of those drugs. And I am a person who has enjoyed drugs myself, so I am not saying this to discourage you from pleasure. I am saying this to save your life and protect your mother from tragedy.

At the end of our event, anyone who wanted to name and let us recognize someone they loved who 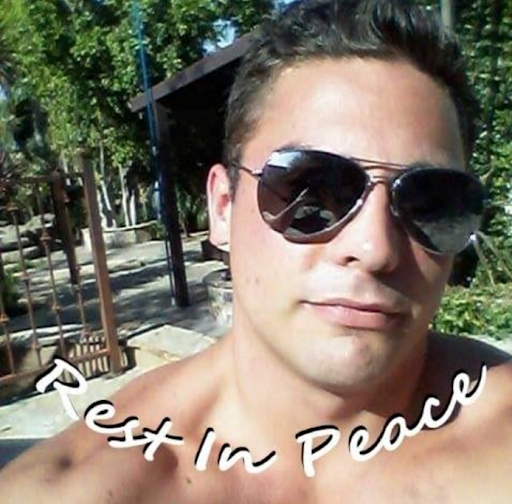 died of an overdose, was invited to do so, and we wound up talking about a dozen or so other people who had died by overdose. I especially wanted to remember two of Kyle's friends, one who died four months before Kyle did, Peter Parise (left), someone Kyle admired and felt a kinship with-- and whose death probably made Kyle feel more hopeless than he already did. Our sons' connection led to a friendship between me and Pete's mom after their deaths that has meant a great deal to me as I navigated these years of grief. And Samantha Owens, a beautiful young woman with whom Kyle lived in Las Vegas for a while, both of them and their third roommate all shooting heroin together. I had hoped in the intervening years maybe Sam (below) had gotten clean, but instead she died this year of an overdose. 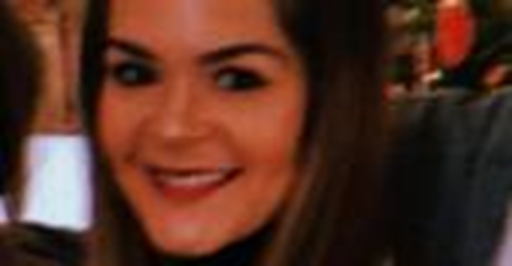 My son, just like Pete and Sam and all the other people we remembered that night, was more than his addiction, and even though we remembered Kyle on overdose awareness day, I want him to be remembered for more than his overdose. He was an incredible friend, a wonderful brother, grandson and son, a great skier, a lover of books, a comedian, a rock climber, a doting daddy for the few months he spent in his daughter's life, a poet and humor writer, a curious conversationalist and a fearless dancer. He lit up all of our lives, and since his light went out, we have all had to struggle our way out of the darkness.

I feel blessed I was able to include more than 20 original works by Kyle in my new poetry collection about him (which is available for purchase from me, local bookstores, Bookshop or Amazon). The poems of his that his friends read showcase his talent but also show how desperate he was to get well. The fact that Kyle will never write another word and isn’t here to read his own poems aloud to us is tragic, but I am so grateful that five of his good friends agreed to gather online with 50 more of us to read and listen to his poetry. We read five poems because on September 20th of this year, Kyle will have been gone five years. 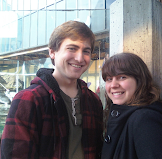 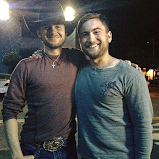 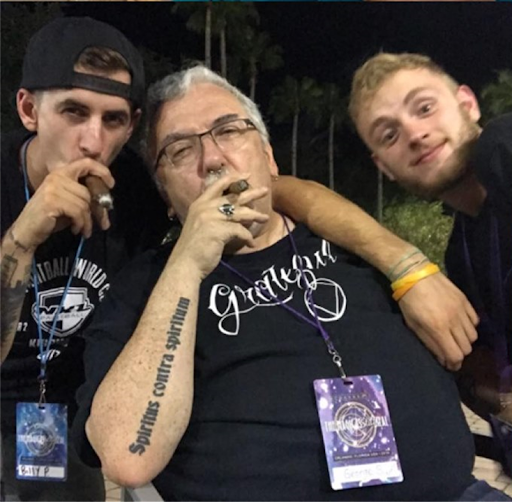 The readers were (from top left) Evan, an old friend of his from Americorps in Seattle, who missed her time slot and was replaced by Ashley, an old friend who knew him when he was in recovery in California; Steph, Kyle's first love; Tommy, a songwriter who was in Kyle's last rehab with him and has stayed clean since shortly after Kyle died. Plus, right, George, his grandsponsor (sponsor of Kyle's sponsor);
and, below, Dwight, a house manager here in Western Mass who had to call the cops on Kyle when he discovered him using heroin in the house. He drove them all crazy, but they all still loved him. They each said a little about Kyle, in words I found moving and inspiring. and then each read one of his poems. You can watch a  recording of the event here: https://youtu.be/AbXbzdwd3h0 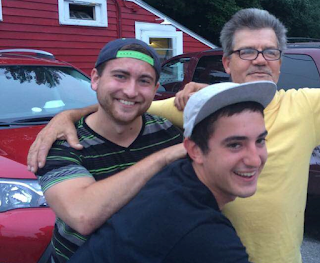 At the end of the event, Kyle's little sister, Jamie, read aloud from a text exchange she'd had with Kyle the year before he died. The words she shared (in the text displayed below) most vividly brought my son back to life and showed how smart and funny and wise he was, and why we all kept hoping he was going to be OK. I hope the event and this essay helps someone else say "Yes! That's a great idea," when their loved one talks about using medicine to help them stay clean -- because that's What I Should Have Said. 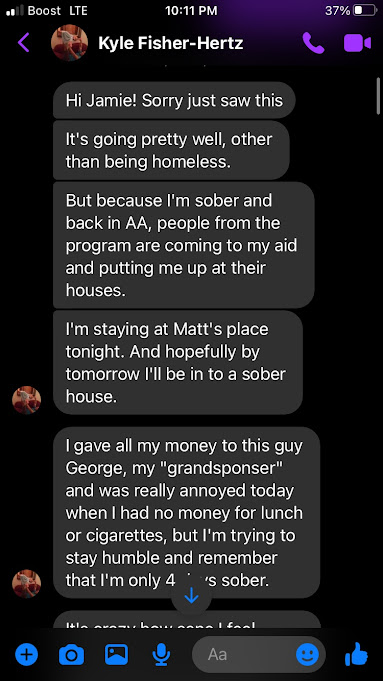 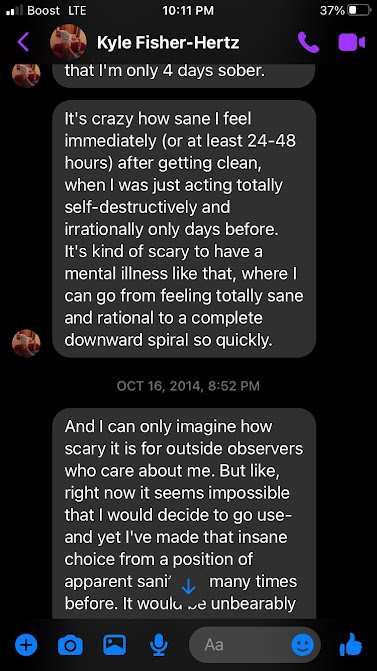 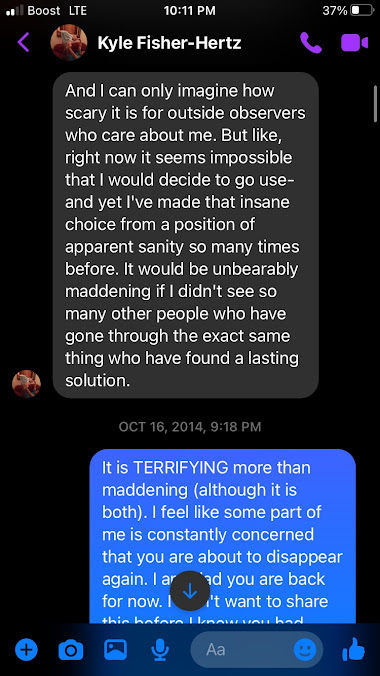 Posted by Lanette Sweeney at September 02, 2021