Time to Talk about Suicide, especially with our children 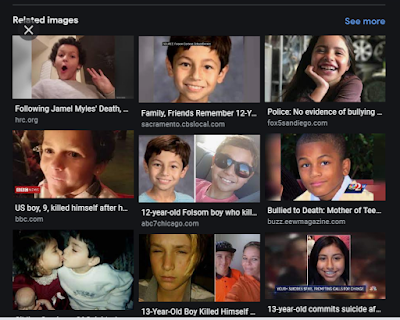 As a member of several, online, grieving-parent support groups, I hear every day about children dying in every possible way: by car accident, by cancer, by falls, by electrocution, by drowning, by sudden heart attack (at age 18!) or by other unexpected tragedies, such as by overdose like my own son, or by suicide.
Although we all grieve our children, the parents of suicides seem the saddest. While all parents feel (mostly irrational) guilt over their children's deaths, none feel as wracked by shame and horror as the parents of children who take their own lives.
During the height of the covid lockdowns, a newly bereaved mother in a Compassionate Friends group shared that her 11-year-old son, whom I'll call Ryan, a beautiful boy whose smiling photo she posted, had killed himself without warning. His mother says he was a healthy, happy child who never showed any signs of depression but just became overwhelmed by not being allowed outside nor ever getting to see his friends. The tragedy of this haunted me deep in my bones. Knowing that youth suicide is a growing epidemic is even more haunting.Above right is a photo of some children who killed themselves in the past few weeks; is there anything sadder than kids this young ending their lives?
This is the shadow pandemic, the wave of suicides and overdoses coming in the wake of what this pandemic is doing to our world. In 2020, The Washington Post predicted there would be up to 20,000 additional suicides over the next year as a result of the mental-health pandemic that is following in the wake of the corona virus. And youth suicides had already been skyrocketing over the previous decade, as had overdoses. I know for sure that overdoses exploded in the first months of the pandemic, rising to more than 93,000 dead for the year, a national record. Here's what youth suicide looked like before the pandemic hit: 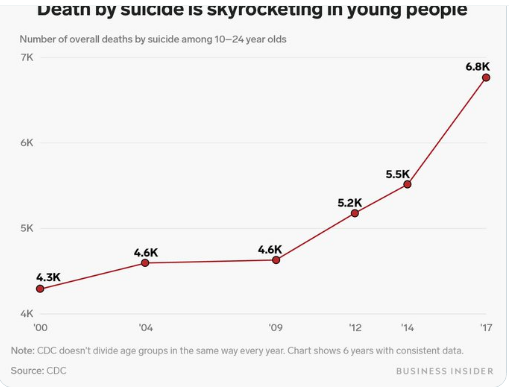 Following the pandemic, 56% more girls were hospitalized for suicide attempts than in the previous year, and suicide became the number one cause of death for children ages 13 to 15.
Sadly, for children Ryan's age, suicide is often done on impulse, without the child showing any prior signs of depression. Suicide was previously the third leading cause of death among children between the ages of 10 and 14 (and the second leading cause of death for young people between 10 and 24). While females think of suicide more often, males are four times more likely to kill themselves than females, putting boys, who are societally discouraged from talking about their feelings, at particular risk. And while older teens often suffer diagnosed mental health disorders such as depression and anxiety, and exhibit warning signs before attempting suicide, younger children often commit suicide with no forethought and little warning.
When I was 15, I attempted suicide. Like most people who truly mean to die, I gave no indication I was depressed. I acted cheerful all day–and then before bed swallowed a bottle of my grandmother's Valium. I remember with crystal clarity the bone-deep, exhausted-with-life feeling I had as I stood in the bathroom swallowing all those little yellow pills. I'd had many stepfathers, several of them abusive, from whom my mother felt unable to protect me, and at that time it seemed to me that life was and always would be nothing but pain–or at least that the pleasurable parts couldn't possibly outweigh the pain of slogging on. Unbeknownst to me, I was also about to get my period, a regular event that caused debilitating depression to descend on me for three days every month for the next 35 years (until I mercifully went into sudden menopause upon the death of my son).
Six hours after I had taken the overdose, against all medical odds, I stood up from my bed (in an unconscious state) and walked to my uncle's bed and told him what I had done and then passed back out. So clearly there was some part of me that still wanted to live, but after the doctors made me drink cup after cup of charcoal, they told my mother I needed to be hospitalized.
I spent that summer in a mental hospital, the kind of cushy place that used to be covered for months at a time by insurance; it had a spacious, bright adolescent wing and all kinds of therapies. My doctor there was an idiot who told me PMS was a myth and I needed to stop imagining it--but the other kids there, most of them, were just normal adolescents from screwed up families struggling to figure out a way forward. And most of the aides and nurses there were wise and wonderful and talked to us about how we would be able to get away from our parents and make our own lives one day soon, that we just needed to hang in there. We all listened to Pink Floyd's Dark Side of the Moon album repeatedly, feeling it had something profound to say about how adulthood often trapped people in empty, meaningless lives. Most of us, the ones who weren’t suffering from some organic mental illness like schizophrenia, gained strength there to try to live some other, fuller way when we got out. 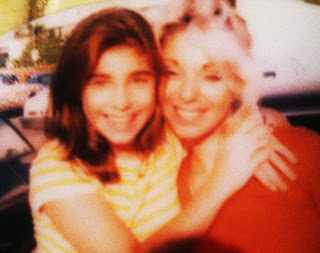 To the left is a photo of me with my mom a couple of years before my hospitalization, which  none of us could have seen coming. I'd always seemed like such a happy kid, able to roll and adapt to anything. Until I just wasn't anymore.
I continued to struggle with pretty awful depression until I reached adulthood, and I sadly suffered serious depressive episodes as an adult, too–but once I had children, the option of committing suicide was simply off the table for me. My father had killed himself when I was an infant, something I hadn't discovered until I was 12 (and learning he had done that likely contributed to my choosing to follow in his footsteps when I was 15, as copycatting is a real, heartbreaking phenomenon with suicide. Both my father’s brothers followed his examples and died by suicide, as well). I knew that no matter how I suffered, I would never leave my own children with that legacy. So even in the worst throes of misery, I have just had to tell myself life will end soon enough for all of us and that in the meantime, I am stuck here with no choice but to grind on. I am seasoned enough by now to know that feeling that miserable is temporary and means I am particularly unwell and in need of help.
Since I know I will never do anything to make my occasional death wish come true, I instead force myself to work hard at self-care, therapy, medications, daily yoga, exercise, spending time in nature, making time for art and pleasure, meditating, listening to my own needs, etc., because if I have to be stuck living here, I may as well feel and spread as much joy as possible. I am very grateful for the medications–and the lack of premenstrual hormones–that keep me on a more even keel now. And most days, even more mercifully, do not feel like a slog, they feel like the gift they are.
How terrible that young Ryan didn't get to live long enough to have perspective, get help or make any of these realizations. How awful that suicide rates have risen 30 percent over the past two decades, along with overdose rates rising more than 137 percent from 2000 to 2015. This massive increase in young people dying “deaths of despair” by their own hand, whether by suicide, alcohol, or “accidental” overdose, as in the case of my son, are the canaries in the coal mine of our society telling us something is deeply wrong with how we are living. I was hoping, like many of you, that the pandemic might serve as a wake-up call and help us pay better attention to our feelings, allowing us to find new ways of living. The jury is still out on whether we've done this or still might.
In the meantime, I hope reading this gives all of you who still have kids at home permission to have an open conversation about suicide with them, to let them know that imagining our own deaths is normal. It may feel scary to admit this to your children, but it's better for them to know everyone has those dark thoughts than to think their own feelings are proof there is something terribly wrong with them. My therapists have assured me that nearly all of us do imagine our own deaths, sometimes longingly. As young people, especially when we feel angry and disempowered, we may enjoy imagining the grief we could spitefully cause our loved ones, how sorry we could make them if they had to attend our funerals. But fantasies like these are not the same as making plans to take our lives; planning one’s own death is not normal–and is, in fact, a clear sign that an illness has taken over our thinking and that we need help outside ourselves. If the voice in your head is advising you to take your own life, please recognize that voice is not your friend and must be reported.
I hope you let all your loved ones know that hopelessness is a lie their illness is telling them. No matter how terrible they feel today, there are many things that can help them feel better, and I hope you tell them explicitly that you will help them try all those things one by one until they figure out what works to restore their will to live. My son ruined the chemistry of his brain with drugs that made him think he could never feel better without being on drugs, but that was a lie his sickness was telling him. He might have needed a bridge to wellness with recovery medication but eventually he could have learned to find happiness in the thousand small moments we've had to enjoy without him, wistfully imagining how he might have enjoyed something if he were still here.
I pray none of you ever endure a tragedy like the mother of 11-year-old Ryan--nor ever leave your own families to endure the self-inflicted loss of you. And I hope you'll all join me in breaking the stigma around suicide and talking to the people you love before it's too late, because truly, we never know what secret, shameful thoughts people who seem fine might be having. Show the people you love that suicide is something loving families can talk about and that suicidal feelings are something all of us can survive.
Posted by Lanette Sweeney at October 21, 2021